The history of aboriginal Australia is a long and fascinating one, and we are proud to have our own slice of it right here in Broken Head and Byron Bay. The Arakwal people have lived in the area for more than 22,000 years, in fact some historical records claim it’s twice as long as that. The Arakwal are one of more than 500 tribes that make up the aboriginal people of Australia.

European sightings of the Arakwal people were first recorded on 16 May 1770 by Captain Cook from the ship HMS Endeavour – Cook had set anchor near the spot of the current Byron Bay Lighthouse at Broken Head. Cook assessed the area from the shoreline and is believed to have spotted around 20 Arakwal people wandering around on Seven Mile Beach which sits north of Lennox Head and south of Broken Head. Interestingly the Arakwal people were completely unmoved by the sight of the ship and its inhabitants floating in the bay, implying that there had been other such sightings prior to the arrival of Cook and his crew.

Aboriginal facts about the Arakwal people 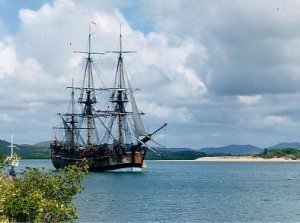 Replica of the HMS Endeavour

The Arakwal people refer to the area of Broken Head and Byron Bay as the ‘Cavanbah’, which translated means the “meeting place.” As such it was a location where trade could be carried out and gossip swapped (just like a market place today) between the Arakwal people and their neighbouring clans. It wasn’t until 1894 that the village of Cavanba became known as Byron Bay but today you’ll still find Cavvanbah Street situated between the beach and Shirley Street in the Byron Bay township.

The Arakwal Bumberlin belong to the Bundjalung Nation which enjoyed some of the most impressive fishing and hunting grounds in the whole of Australia at the time. The Bundjalung Nation comprised 15 different tribes, the Arakwal being one of them. Others included the Banbai, Gidabal, Jungai, Minjungbal and Ngamba.

Interestingly the Arakwal’s ‘dream time’ stories refer to ancestors ‘arriving’ in Australia from elsewhere, a place known as ‘the centre of the world.’ This was believed to have been destroyed, hence the arrival of the Arakwal in Australia. Many historians today believe the former land to have been an island just off Australia in Micronesia. The legend surrounding their arrival is known by the Aboriginal people as that of ‘The Three Brothers.’

Today the Arakwal people are recognised as the official custodians of the area of Byron Bay. In fact, the official Arakwal Country reaches from Seven Mile Beach at Broken Head northwards towards the Brunswick River and west of Byron Bay. Its eastward reach goes as far as (and includes) the Tasman Sea.

About Aboriginal culture and Dreamtime Aboriginal culture adheres to the concept of Dreamtime but it means different things to different tribes. For instance, for some it referred to ‘the time before time’ and for others it meant ‘the start of both time and knowledge.’

The Dreaming was believed to involve culture and how a tribe should live and regard its neighbours and each other within the tribe itself. It was also meant to have educated them on particular ceremonial rituals and influenced the way they looked after the land of which they were custodians.  Many stories involved creation such as the sea, animals, foliage and the stars.

In ‘time before time’ the earth is believed to have been dark and silent with the Great Spirit Ancestors sleeping under the ground. According to legend the sun appeared when the ancestors woke up and broke through the ground. This is believed to have been the beginning of light. The ancestors travelled over the land and created rivers, trees, mountains and plains. They then created people and animals followed by air, fire and stars.

After their journey of creation the ancestors are believed to have lain down on the ground again and allowed their spirits to sink into it. The spirits then became trees, animals and rocks – hence the aboriginal beliefs that these items are sacred.

Coastal tribes such as those of the Arakwal would hone and attach fishbone to the end of spears. Other implements included knives, axe-heads and sticks for digging. The Aboriginal tribes are believed to have been the first in the world to have used stone as a tool for grinding seeds and cutting wood and animal skins.

After colonisation by European nations aboriginal people discarded stone and began incorporating other items into their tools such as glass and metal. Boomerangs and clubs soon became valued weapons. Location of the Bundjalung People in Australia

Aboriginal people are believed to have existed in New South Wales and Broken Head for more than 45,000 years, according to the Australian Government. Because of this many sites in the state still show the remains of Aboriginal occupation and are still relevant to indigenous people today for social, commemorative and spiritual reasons.

Because of their obvious importance to aboriginal tribes, the government of New South Wales have deemed many of these sites legislative in that it is an offence to destroy them. The National Parks and Wildlife Act 1974 (NPW Act) states that it is illegal to “harm (destroy, deface, or damage) or desecrate an Aboriginal object or Aboriginal place, or in relation to an object, move the object from the land on which is has been situated.” Such a site can be identified under the Aboriginal Place declaration and found under the NSW Atlas of Aboriginal Places.

There are actually more than 65,000 officially recognised Aboriginal sites in NSW. They can be found on beaches, in towns, forests, plains and alongside well-known rivers. They range from shell middens near coastal areas to stone artefacts in inland areas and on plains. They comprise cemeteries, massacre sites, art on rock and former tribal settlements.

Carved trees were often used to mark both ceremonial sites and burial grounds. As in Stonehenge in the UK, stone arrangements marked particular and important ceremonial sites.

It was back in 2001 that the government of New South Wales officially recognised the Arakwal people’s rights as custodians of the land and water in and around Byron Bay. This was made clear in three Indigenous Land Use Agreements which are now public record.

In 1996 the Arakwal people, together with the help of the New South Wales Government, local community groups and nearby businesses set up a corporation known as the Bundjalung of Byron Bay. Its purpose is to reinforce the Aboriginal identity as well as the people’s culture. Practical matters include improving housing for the Arakwal people, boosting health and well-being initiatives and looking at employment schemes and provision.

This is why visitors to Broken Head and Byron Bay will find a number of projects and events promoting the Arakwal culture and lifestyle including the upkeep of the Arakwal National Park and the Cape Byron Marine Park.

As mentioned, the government of New South Wales signed a historic treaty with the Arakwal people back in 2001 which recognised their ownership of this particular area of ground, their heritage. One of these is the stunning Arakwal National Park. 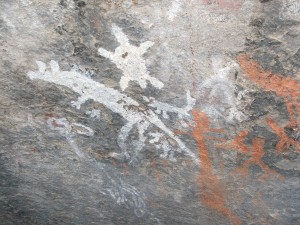 The Park boasts many migratory birds and wildlife as well as three kilometres of stunning beach, sand dunes and coastal heath.

From the town of Byron Bay it can be reached via a 3.2 km drive along Lawson Street from the town centre. Then follow the signs for Lighthouse Road and Tallow Beach Road before stopping at the Cosy Corner car park.

The Arakwal people and their links to Broken Head Holiday Park

Arakwal as an organisation have a management board which meets up regularly with other agencies aimed at improving the amenities of Byron Bay. This includes the Cape Byron Reserve Trust and the Marine Park as well as the regional Office of Environment and Heritage and Byron Shire Council.

For more information about aboriginal culture and the Arakwal people please feel free to contact us at Broken Head Holiday Park.