Book Now »
You are here:Home » Blog » Byron Bay Activities » 7 Camping Games You Can Play in the Dark

7 Camping Games You Can Play in the Dark

When the sun sets, kids don’t just immediately go to sleep. Often they look for something else to entertain them, so rather than plonking them in front of the iPad, why not suggest one of these fun camping games to play after dark?

Pick someone to be “it,” and that person carries the flashlight. The person who is “it” counts to at least 30, probably better to do 50, while the rest of the children hide. Once done counting, the “it” person uses the flashlight to try to find people and shines the light on them to let them know they are out. You can play where everyone has to be found, and then the first person who was “tagged” (or had the flashlight shined on them) is it, or you can just do it where whoever gets shined on first is then it. Also, it’s a good idea to set boundaries as to how far each direction the children can wander.

P.S. You’ll find that glow sticks can help you play many other games at night, too! Be creative. Start out by giving a select number of  players a glow stick, which they will wear around their wrists. (See, those glow sticks are already being used again!) The rest of the players have been “brainwashed” by aliens, and they are looking for more people to brainwash. Pick certain areas around the camp grounds for safe points where the glow stickers can rest. Also, pick two other spots that will serve as the alien base and the other as human zone where tagged aliens will hang out. The goal is for the glow stick people to “free” all the aliens, or for the aliens to capture all the glow stick people. Whoever does either first wins!

This game is fun to play in a circle at night because you won’t have to see someone turn red when answering an embarrassing question, and it adds an element of fun for the dare options. The game works like this: A person is asked, “Truth or Dare,” and either the person picks the truth and then answers it or perform a “dare.” The person who asked the question to the other picks the dare. However, if someone decides not to answer the question, then the option to complete a dare is available. Once the person either answers a question or does the dare, then it’s that persons turn to pick someone to ask “Truth or Dare.”

Pair up players, and the two need to create a flashlight signal (for example, one short and one long flash). Partners separate and scatter throughout an area. Once someone shouts, “Go!,” then players begin flashing signals trying to find their partners as quickly as possible. The first pair to reunite wins. 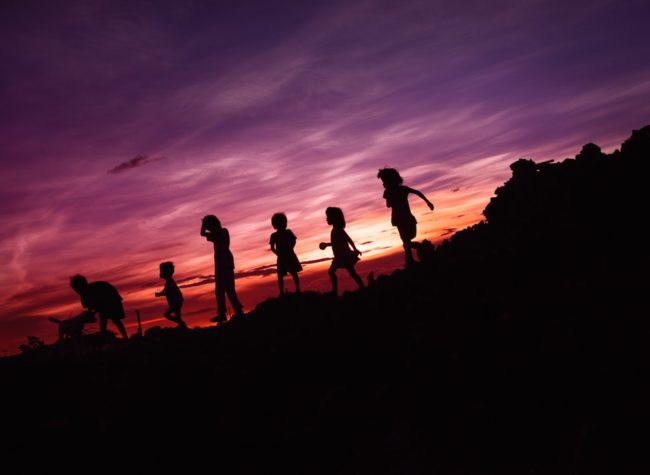 Pick someone to be the firefly. That person will take a flashlight that either has been covered with colored plastic wrap or has a red light setting that can used. The “firefly” moves away from the rest of the players who are counting to 20. Once finished counting, the players are going to look for the “firefly,” who should be constantly moving around. Every minute or so, the “firefly” flashes the flashlight on and off a few times. Once someone catches the “firefly,” then the game is over and everyone comes in to pick a new “firefly.”

This easy, but fun game is a great one for night because you can just play with a few people sitting in a circle either in a tent or in a circle on your campsite. Telephone works this way: One person whispers short message to another player, then that person whispers the message to another player. The message is passed player to player until the last person announces it to the group. Because of how someone whispers or hears the message (or sometime people change up the message along the way for fun), the resulting message may be a hilarious version of the original.

If you’re looking for more ideas and ones you can play during the day, check out our other post on camping games.

Plan to play your camping games at Broken Head

Bring the whole gang, family, friends or group for a fun-filled camping holiday at Broken Head Holiday Park. We have powered and non-powered campsites, as well as beach cabins, beach shacks and excellent facilities. Tour around the Bryon Bay Area during the day and soak up the fun, and plan to return to your campsite at night where you can play any of the excellent games above. Tag, you’re it!