Is Byron Bay the Best Place for Whale Watching & Wildlife?

Definitely! It’s a well-known fact that we’re kinda spoiled for whale watching in Byron Bay, having an abundance of wildlife and a host of feathered friends. At Broken Head Holiday Park we revel in this distinction of course. Being so close to some of the area’s best nature walks, bush walks, wetlands and whale spotting points, we’re used to seeing new and exotic birds, mammals and furry creatures on a regular basis. And we’re delighted to say that those who come and holiday with us can usually return home saying the same and with a great collection of snaps in their camera or iPhone.

We’ve made a list of what you can expect to see when you come holiday with us here at our bird, fish and animal sanctuary in Byron Bay this year. Much space in this article is devoted to whale watching in Byron Bay – for the sheer fact it’s so spectacular and rare – Byron Bay being one of the best whale watching locations in the whole of Australia.

If birds and two or four legged creatures are more your thing though read on past the whale watching in Byron Bay info because we’ve plenty to say about those too:

It may be June at the moment and right at the start of the official season for whale watching in Byron Bay, but the first of these magnificent creatures were spotted in Byron Bay as early as May 13 this year.

The location was Julian Rocks and the spotter was local whale watching skipper Peter Rullin who told his local newspaper The Northern Star that he saw a couple of humpbacks leading the migration. 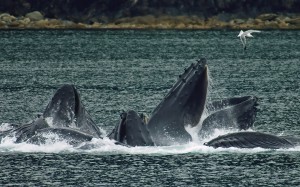 Up to 17,000 whales are expected to make up an 11,000 km migration from Antarctica and along Australia’s East Coast between June and August – one of whom is an albino called Migaloo whom the team are hoping will return again this year.

Experts actually regard these huge marine mammals – along with dolphins – as practically “the humans of the sea”, such is their intelligence.

Byron Bay celebrates the annual migration with a Whale Festival every year in early June. This year a total of 29 whales swam by – much to the delight of onlookers and environmentalists. The mammals were on their way to the warm waters of the Great Barrier Reef in Queensland but will return to their feeding ground in Antarctica between September and November.

Cape Byron, being the most easterly point of the mainland, is the closest to the Pacific’s eastern current. Because of this the area became a big whale hunting region during the 1950s and 1960s.

There’s generally a whole host of spots where you can catch a site of the whales in the Byron Bay area but according to Blue Bay Whale Watching director Christina Gray the best way to see them is by taking a guided tour boat or watching them from the Byron Bay Lighthouse or Broken Head beach early in the morning or just after lunch. Generally they can be spotted around 10km offshore.

What type of Byron Bay whales can you expect to see?

Humpbacks – including mothers and calves – are the most common form of whale to be sighted in the New South Wales area (known as the whale capital of Australia) but there’s a fair chance you’ll also spot a Southern Right – the latter less likely to get freaked out by the nearby presence of humans. Killer whales may also be present (thankfully these are a danger to seals and other sea life rather than humans!).

Different activities to embark on while whale watching in Byron Bay 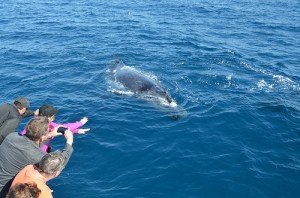 Get up close & personal with a whale!
Image by: eGuide Travel

A number of companies run whale watching charters in the Byron Bay area, the biggest two are Whale Watching Byron Bay and Blue Bay Whale Watching. These allow participants to get up close enough to hear these playful creatures at times. The trips are certified and generally regarded as safe and comfortable with provision for up to around 12 individuals per trip.

Both boat trips – which run from June right through to November and take around two to three hours – provide live commentary and 360 degrees viewing. And what if you don’t manage to spot a whale? In the unlikely event you’ll get a voucher for a return trip – and you can keep coming back until you do get a sighting. Having said that, those who run the tours insist you’ll probably spot several whales within minutes of leaving Byron Bay.

Some of the cost of the ticket for the trip goes towards further whale research in the region. Trips, which should be booked in advance by contacting the companies direct, are priced at around AUD$89 for adults and kids under 12 can sail for AUD$55. 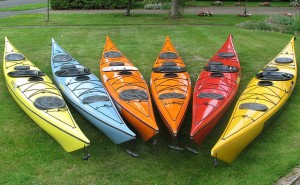 Fancy kayaking next to a whale?

A way to get even closer to the whales – if you have the nerve – is to go sea kayaking. Like dolphins whales tend to be rather nosey and aren’t afraid (especially the Southern Rights) of coming right up to a kayak to have a closer look. Several Byron Bay companies run whale watching in Byron Bay kayaking tours, the biggest being Cape Byron Kayaks and Go Sea Kayak Byron Bay. Expect to pay around $69 for a three hour tour ($59 for kids aged 15 years and under). Group discounts are also available.

Those who fancy getting underwater into the whales’ own habitat may be keen to hook up with Byron Bay Dive Centre. Dives last for around 50 minutes and include instruction. Full equipment hire and a dive costs $99 for a first dive and $89 for the second. The cost comes down for those who turn up with their own dive gear.

That just about covers our commentary on whale watching in Byron Bay. We have a feeling lovers of winged creatures may enjoy the next segment though.

Bird watching is a pretty fascinating activity here thanks to the magnificent West Byron Wetlands. It’s also an extremely rewarding past time for seasoned or beginner ornithologists; such is the diversity and colours of birds in the region. 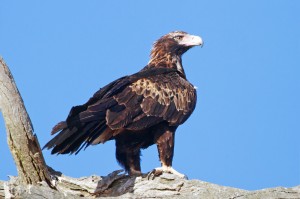 The wonderfully calming Wetlands is home to an abundance of our feathered friends from Feathered Kites to Swamp Harriers, Friarbirds, Spotted Harriers, Wedge Tails, Peregrine Falcons and even a rare Wedge-tailed Eagle. Twitchers may even be fortunate enough to spot a turtle laying eggs in a nearby sand bank.

Belongil Estuary is another high point for bird watching in Byron Bay. This area actually receives the highest rainfall in the whole of New South Wales with an average of 1,850mm per year – as a result it’s populated with birds, wildlife and fish. Here you should be able to spot some wonderfully-named birds such as the Rainbow Bee-eater, Sooty Oystercatcher, Bartailed Godwit and Beach-stone Curlew. You might also come across a Black-necked Stork (easy enough to identify we’d have thought) and a Red-capped Plover.  There’s also the more familiar Pelican and Osprey of our story books.

One word of warning though – in order to access the above habitats you’ll have to get a permit. This is done by downloading a form on the Byron Shire Council website. You can also contact the relevant authority there for more information on permitted times and seasons.

See what the Byron Bay wildlife gets up to when it’s dark by joining a night walking group. Using goggles specially adapted to spot nocturnal animals. You’ll have fun spotting Bandicoots, Possums, Tawny Frogmouths and perhaps even the odd owl or Koala. You may even get to see a spectacular colony of glow worms lighting up the darkness. This is a one-off tour that really should be high on your list of ‘must do events’ when visiting Broken Head Holiday Park.

Vision Walks organise the whole expedition. They’ll pick up from assigned spots, supply the goggles and even provide hot chocolate and cookies. Organisers count on spotting up to 15 species of wildlife every trip, making sure no-one leaves disappointed. As you would imagine, sturdy walking boots and raincoats are mandatory for anyone coming on the tour. Children must be aged 10 or over and capable of walking up to two miles at a time.

Most people who come to Byron Bay will take a trip up Byron Bay’s highest peak (also known by the Aboriginal people as Wollumbin) to watch the morning appear. Just remember to bring your camera because, we can assure you, this is one sight you’ll want to replay over and over again. Then there’s the wilderness and wildlife you’ll come across en-route. This is a nine mile hike in total which takes an average of four hours up and down. 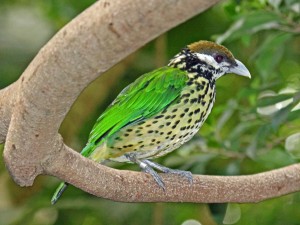 Look out for the White-eared Catbird

It’s a trek through colourful rain forest until the last 50 metres or so when there is a bit of scrambling over rocks to be done (insitu chains are there to provide aid and safety). The 360 panorama on the summit is well worth the effort put into getting there in the first place. The mountain’s peak sits proudly 1,156 metres above sea level. Really, what’s not to like?

During the walk through the Gondwana Rainforest, expect to come across Pitta, Whitbirds and the mimic of the bird world – the Lyrebird (especially if you take a detour along the sign posted Lyrebird Track).

Other wildlife and birds you can confidently expect to see include the Paradise Riflebird, Cat Bird, the Scrub Turkey and a selection of fruit eating Pigeons. If you’re lucky you might even spot a Marbled Frogmouth.

The climb up this spectacular mountain can be done independently – remember to take water and food for snacking on – but there are also organised company tours in the area such as those by Byron Bay Adventure Tours.

No visit to Byron Bay is complete without trying a spot of beach fishing – or even just spending an hour or two watching the experts in action. Bream, tailor and whiting are all in evidence in the area with Watego’s Beach and Cape Byron particularly bountiful in these specimens. Northern bluefin tuna and jewfish can also be found nearby; ensuring that evening’s family Barbie is bound to be a success and a half.

Lovers of crab meanwhile (and we count ourselves in this category) should head to Brunswick Heads where there’s also a fine ocean store of bream and luderick.

Stay with us for whale watching in Byron Bay

So there you have it – the bird and animal sanctuary that is the Byron Bay area. The above is just a selection of past times you can get involved in to spot the wonderful variety of wildlife, birds and mammals we have right on our doorstep here at Broken Head Holiday Park in Byron Bay.

Speaking of which, the best reason to stay with us is the fact that you’ll have a front row seat for whales cruising past Broken Head Beach!

Here at Broken Head Holiday Park we can provide everything you’ll need accommodation-wise, as well as further information on whale watching in Byron Bay, and nature activities. Why not take a look through our site and book today, the whales won’t wait!