Book Now »
You are here:Home » Blog » Festivals & Events » Step Out in Style at the Byron Bay Latin Festival

Step Out in Style at the Byron Bay Latin Festival

Sassy salsa, tantalizing tango and rollicking rumba – visitors to Byron Bay are sure to love Latin music and dance if they happen to be visiting the region at the beginning of November. In fact we’re betting that most of them will be positively stepping out in style when they encounter performers and fans of the 9th annual Byron Bay Latin Festival.

This is when Byron Bay’s normally laid back streets are set to be jumping to the sounds and steps of some rhythmic African, Native American and Spanish sounds. 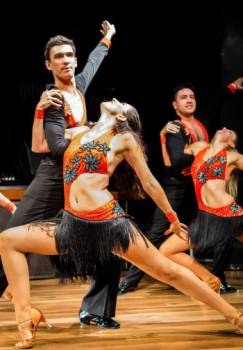 Beginners, novices and experts in Latin dance and song will all be immersing themselves in four nights and three days of Latin American culture in Byron Bay next month (November). Workshops and performances from some of the best dancers, musicians and singers in the genre will be scattered throughout Byron Bay from October 31 to November 2, 2014.

Fans who love Latin are expected from throughout Australia and Europe. Those who just can’t wait until the first day of the Byron Bay Latin Festival can always get involved in the fun of the pre-festival party. Held on October 31 this now-annual event is a warm up to the days ahead and will consist of plenty of music, dance, beer and song from 7pm onwards. Check out DJ Luis and DJ Super Juan who’ll be spinning the discs on the evening.

Some of the international instructors and performers set to appear this year include:

Those who love Latin dance and song and are worried about missing out on their favourite performers due to high audience numbers have nothing to worry about this year since most acts will be beamed onto large screens throughout the main venue at the Brewery. There will also be separate dedicated areas for bands.

Here at Broken Head Holiday Park we’ve already made a list of our ‘go-to’ events for the Byron Bay Latin Festival. These include: 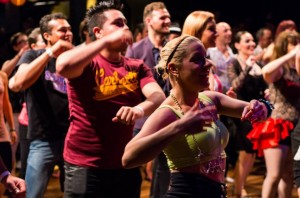 Everyone loves to join in the moves…

Master workshops are also available at the Grand Buree. However these are only open to intermediate and advanced level dancers, with admittance via ticket only.

How do I get tickets?

Full Pass tickets can be bought online for $290 or $300 on the door. Early bird tickets are available until September 30 with a $40 saving on the door price. Day and Party passes are also available. Registration takes place on October 31 at the Buddha Bar at 6.30pm.

Getting to Byron Bay

Organisers of the event currently have links for four separate flight companies on their website and warn that if you’re looking for a reasonably-priced plane ride then now is the time to book! If you’re within a few hours of Byron Bay then driving would be the best option.

The Byron Bay Latin Festival means that a quiet weekend in Byron Bay at the beginning of November will be impossible unless you stay with us here at Broken Head Holiday Park. We have a range of cheap Byron Bay accommodation choices to suit all budgets and preferences ranging from Beach Cabins to Beach Houses, Beach Shacks and powered and non-powered camp sites. Wi-Fi is available throughout the park, so don’t worry, you can still upload photos of your Latin dance moves to Facebook.

If you love Latin music, dance and song and are planning to stay here at Broken Head Holiday Park for this Byron Bay festival then book now to ensure you’re not disappointed. Enjoy!